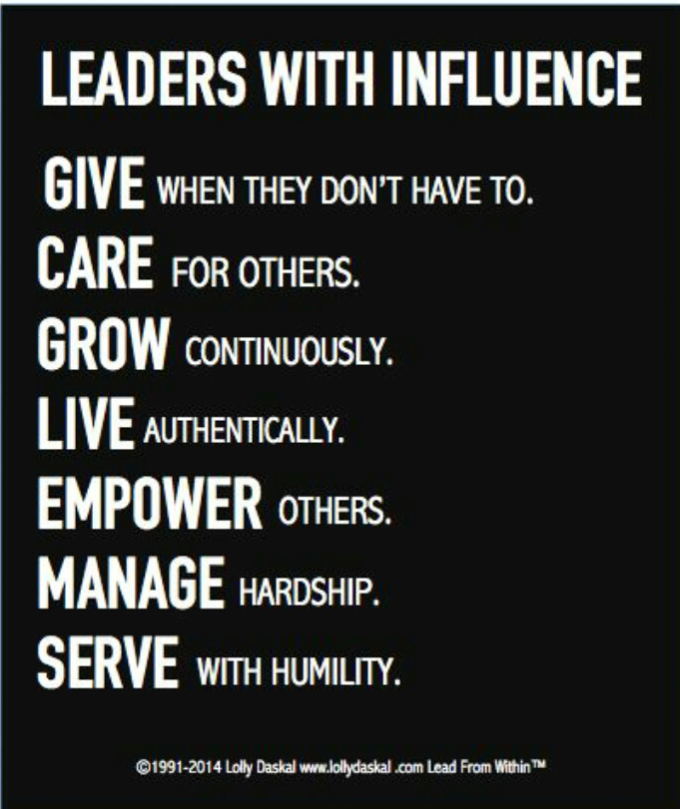 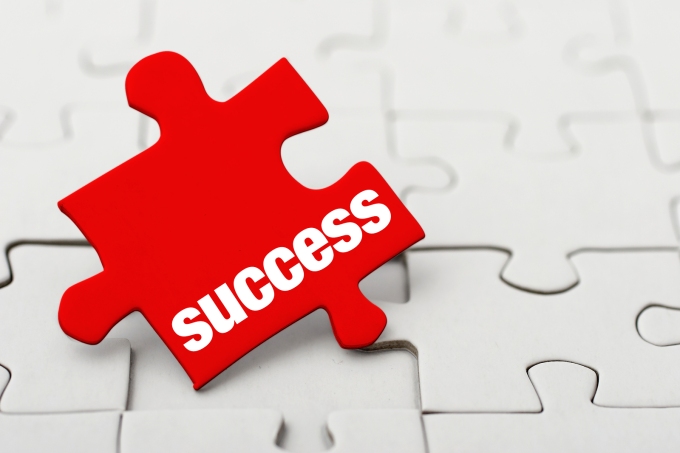 Everybody loves a good secret. In fact, the juicier, the better. Why? Because we all love being insiders. We love the feeling of exclusivity, of knowing something that’s just ours and no one else’s. But in business, secrets do more than just stroke our egos.

We love having the upper hand. We love having the “unfair advantage,” to borrow entrepreneur Jason Cohen’s term. So when someone like Dr. Ivan Misner, founder and chairman of BNI, the world’s largest business networking organization boasting 5.4 million referrals and more than $6.5 billion in resulting revenue, asks, “Do you want to know the secret to success?” you listen. What’s “the secret”? Well, there isn’t just one.

But think about this: “Success is the uncommon application of common knowledge.” In other words, when it comes to success, what matters isn’t so much learning something new but putting into practice what we already know. Here are four not-so-secret secrets of insanely successful people:

According to Warren Bennis’s classic On Becoming a Leader, leadership is “the capacity to translate vision into reality.” This means that success starts with answering a fundamental question, What do I really want? Whether you call the answer to that question your mission statement, core values, brand identity or just your goals doesn’t really matter. Because “a rose by any other name would smell as sweet.”

Here’s how Bennis unpacks the idea: The leader has a clear idea of what he or she wants to do—professionally and personally—and the strength to persist in the face of setbacks, even failures. The key word is “clear.” And clarity means writing it down. In fact, as SUCCESS.com’s infographic on the habits of the world’s wealthiest people points out, two of the most statistically significant factors that set the richest people apart from everyone else is that 81 percent of them maintain a to-do list and 80 percent focus on accomplishing a specific goal.

Successful people tell the truth.This sounds so obvious that you might think it doesn’t even need to be said. But in a climate where the pressure to look good, perform well, eke out profits and win by any means necessary is constantly increasing, honesty is becoming a scarce commodity. And yet, honesty pays. According to research in Robert B. Cialdini’s Yes! 50 Scientifically Proven Ways to Be Persuasive, when companies “explained failures in their annual reports, those that pointed to internal and controllable factors had higher stock prices one year later than those that pointed to external and uncontrollable factors.” In other words, taking responsibility for our mistakes and admitting when we’re wrong isn’t just relationally smart—it’s financially savvy.

Another study, conducted by the Corporate Executive Board, found companies that “rated highly in the area of open communication” and encouraged honest feedback among their staff delivered a “10-year total shareholder return that was 270 percent more than other companies.” And what’s true for companies is just as true for us. As Bennis wrote, “Leaders never lie to themselves, especially about themselves…. You are your own raw material.”

It’s 11 degrees outside. My team had a summer fun in February carry-in at work today. I grilled burgers, hot dogs, and BBQ salmon for them. A fun way to break the winter blues.  It was worth it seeing my teams’ smiling faces.

While strong senior leadership is very important, your company’s middle managers are your soldiers on the front lines, dealing with the day-to-day aspects of your business. They have more interaction with employees, so it would be logical to assume they have the best and most helpful insights. In earlier years, companies assumed that job title directly correlated with the employee’s ability to produce the next big idea. But it’s been proven time and time again that diversity of thought is the real idea generator. Innovation most often comes from the people involved in the front line aspects of the business.

Research has consistently shown that employees are more comfortable voicing opinions and concerns with mid-level management, and when their input is heard, are more likely to be engaged and motivated. In fact, as the level of management that is most closely in touch with every employee in your business, your managers are the conduit for communication and recognition.

They are the representatives of your leadership team that employees see and hear from daily, so middle managers are the most capable of assessing employee needs. Their face-to-face feedback signals what works and what doesn’t, what makes employees happy and what helps them thrive. So bringing middle managers into the relationship management aspects of your business will result in better business outcomes. 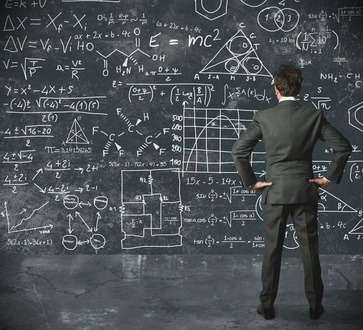 We tend to over-complicate things in life, and when it comes to defining what successful leadership looks like, we really, really, over-complicate it. Much of what constitutes leadership success comes down to common sense, but unfortunately it’s not common practice.

Searching the shelves of your local bookstore (do those still exist?) or doing a search on Amazon.com would lead you to believe that in order to be a successful leader you’ll need to find some keys, take the right steps, follow the proper laws, figure out the dysfunctions, embrace the challenge, ascend the levels, look within yourself, look outside yourself, form a tribe, develop the right habits, know the rules, break the rules, be obsessed, learn the new science, or discover the ancient wisdom. Did I say we like to over-complicate things?

I don’t think leadership should be that complicated. If you’re looking for leadership success, consider these seven simple truths (argh…I did it myself!):

1. There aren’t any shortcuts – Leadership is hard work and most of it is on the job training. Formal education and ongoing development are essential parts of developing your leadership competency, but don’t think you can transform yourself into a great leader by reading a certain book or taking a particular training course. Great leaders are built by being in the game, not by standing on the sidelines or sitting in the classroom.

2. Great leaders started by being great followers – Most successful leaders were successful followers at some point. They learned how to be part of a team, put the needs of others ahead of their own, and work toward a goal bigger than themselves. In our hero-worshiping culture we tend to place the spotlight on the individual achievements of leaders and not pay much attention to how they cultivated those winning ways earlier in their career. Learn to be a good follower and you’ll learn what it takes to be a good leader.

3. There’s no mysterious secret to leadership – Contrary to the titles of popular leadership books, there is no single, mysterious secret to unlocking leadership success (see truth #1). All those books that I lovingly needled offer valuable insights about various aspects of leadership, but most of them tell you what you already know to be true…which brings me to the next point.

4. You already know what it takes to be a good leader – Not to plagiarise Robert Fulghum, but you probably learned in kindergarten most of what it takes to be a good leader. Be nice. Play well with others. Say please and thank you. Do what you can to help others. Of course you have to mature and apply those fundamentals in adult ways like being transparent and authentic with others, challenging them to strive for their goals, holding people accountable, and having difficult conversations when needed.

5. The difference between management and leadership is overrated

The timing of providing your people direction is critical to how that direction is received. If you give direction to someone during a very stressful time their reaction is far less predictable. When someone’s emotions are running high they could have a very difficult time accepting “one more thing to do.”

The most effective leaders will look for a time when a person is more open to receiving direction. This of course requires a leader to know and understand their people but that’s not a significant challenge for an effective leader. 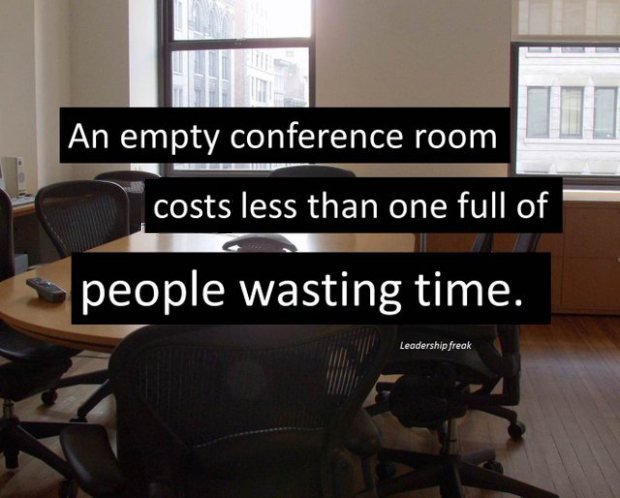 The people around the table can’t wait to get back to useful work.

1. The person running the meeting is inept.

3. Too detailed. Large groups working on details always expand irrelevant specks of dust into giant mountains of mud. Delegate details to individuals or groups of two or three, at most.

The 10 commandments of great meetings:

Law #1: Thou shalt always declare the purpose of the meeting before it happens.

The most important work of the meeting happens before the meeting. Confusion about purpose is always the result of inept leadership.

Law #2: All participants shalt understand and agree that the requirements of law #1 have been fully met.

Declaring the purpose of a meeting doesn’t mean everyone understands or aligns.

Law #3: Thou shalt meet to make decision, never to discuss.

Law #4: Everyone around the table shalt have a stake in the pie.

Law #5: The people closest to the work shalt talk the most.

Law #6: The most powerful person in the room shalt talk the least.

Leaders help their team see new horizons and encourage them to be eager for the journey.