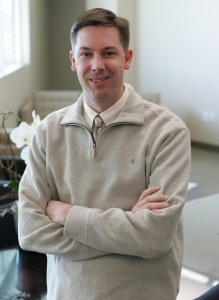 I had the chance to visit this week with John Bolinder, the 36-year-old CFO/Chief Strategy Officer for one of our client companies in Salt Lake City, Nelson Labs. Bolinder was recently acknowledged by Utah Business Magazine as one of the state’s top “Forty Under 40” executives.

While Nelson Labs (“Nelsons” to us) is highly successful as a provider of microbiology testing services (they get medical devices and products prepared to go to market more quickly), what struck me most in my conversation with Bolinder was the meteoric rise of his personal career. The steps he took are inspirational and could be helpful to other aspiring entrepreneurial executives as well.

His success also speaks to a principle I love: not every entrepreneur is a founder. The ability to find and hone entrepreneurial skills within an organization is a tremendous advantage that can benefit any executive or firm.

So I invited him to share his secrets with the readers of Forbes.

Like many successful senior executives, Bolinder didn’t arrive at Nelson’s with an MBA and a relevant background. He joined the company’s mailroom at age 22 and as an undergraduate student in 1999. So how did he rise from mailroom clerk to 28-year-old CFO?

Bolinder’s first contact with his company was not even in the mailroom. He applied for the position of dishwasher in the company’s lab and was rejected as wrongly qualified–because he was seeking a degree in business, the company felt he wouldn’t be a good fit in the lab. But in a fortuitous step, they held onto his resume.

“I was working for the local newspaper at the time, running a delivery truck and working in the Newspaper Agency office,” he recalls. “It may have been a cosmic sign, but the tornado of 1999 had just blown through Salt Lake City, breaking windows and causing all kinds of grief. Then I got a call from the company saying they’d kept my resume on file and they had a position for me if I’d like to give it a try. It was the mailroom position. I took it.”

1. Find solutions. Step one, from the mailroom, Bolinder soon noted the mail desk was using a manual process for shipping that was prone to errors and mix-ups. Within a few months on the job, he implemented an automated barcode and scan process that eliminated manual errors and redundant data entry problems, which helped the mailroom become more efficient. Not surprisingly, he was soon promoted to manager of the mailroom, and began applying his analytical skills to the process of writing test protocols.

2. Have a strategic vision. From the beginning, Bolinder increasingly earned the trust of Nelson’s CEO, Jeffery Nelson, by keeping his eye on the company’s strategic vision and then finding and innovating the ways processes could be standardized, simplified, or interpreted and then taking on the responsibility, with approval, of making those changes. As the CEO’s trust in him grew, Bolinder began making process changes throughout the company.

3. Never be satisfied to rest on your laurels. Next up, after spending time in the customer service department and mailroom, Bolinder realized the company needed a sales and marketing team. Up to that point, the firm had relied entirely on word-of-mouth for its marketing and sales. With the increasing support of his CEO and within a few months of implementation, he was successful in helping the company migrate from an organic and word-of mouth model to a proactive and structured selling approach under his direction. Bolinder developed substantive price models to simplify the company’s complex test models into project estimates that would be readily understandable to lab staff and clients. In the process, he had also streamlined sales by simplifying the quote and test process. The result – several years in, the 20-something executive was now responsible for the company’s lifeblood—continuing sales. To this day, as CFO and Chief Strategic Officer, he continues to oversee all of price and market strategy for the company’s services.

4. Think holistically. With the quote and testing process in hand, Bolinder recognized the company’s next great need would be for the right business intelligence to help them proactively target the right customers for future sales. He found and implemented the solution. He also developed a model for sales forecasting that continues to predict future revenue with great accuracy for the company today.

5. Numbers count. With sales and forecasting now running, Bolinder turned his attention to the company’s accounting. By now we can predict what happened next. Bolinder applied for the job of accounting manager. His request was accepted. Over the next 18 months he implemented new accounting systems and business intelligence reports that further improved the sales process and provided further visibility into the company’s product value streams. Combined with other efficiency improvements, these steps resulted in substantial increases to the company’s bottom line profit as well as its operational cash flow. It’s not always about the numbers–but the numbers do matter.

6. Continually “sharpen the saw.” During the eight-year period of Bolinder’s rise, he also completed his MBA from the University of Utah. With honors (Beta Gamma Sigma), of course.

Nelson Laboratories helps companies speed the process of getting their microbiology-based products into the market.

Now 36, Bolinder is a prominent C-level executive for a company that has doubled in size approximately twice during the past decade, with plans to maintain rapid growth. Since his appointment as CFO in 2007, the company has grown 83 percent from $27.8 million to $51 million in 2012. Bolinder also holds the distinction of successfully negotiating financing of the company’s $11.5M headquarters expansion in 2008, during one of the worst financial markets in history.
Has Bolinder’s rise been simply good luck and hard work? Not at all. As I visit with him, he shares some of the other, less obvious, aspects of his impressive growth and success.

First off, as is likely clear from the name of the company, Nelson Laboratory is a family-owned firm. The current CEO, Jeffrey Nelson, is a relatively young executive himself. He and Bolinder “grew up” in the company together. They forged a friendly rivalry, earning their MBA’s from different schools.
While many would have considered growth in a family-owned company a difficult prospect, Bolinder took a differing view, and saw only the opportunities his unique position offered.

He often employs what he describes as a “train wreck” mentality to the needs and opportunities that arise. “I’m continually asking questions,” he says. “Why? Why do we do it this way? Why does the customer want it that way?”
As Bolinder obtained the opportunity to build teams and solutions, the company rewarded him with increasing levels of trust. When needed, however, he was disruptive as well.

“When Jeff (Nelson) had recently become the president of the company, I was a sales guy looking for information about our accounts and the accounting guy couldn’t give it to me. I was so upset.”
“The accountant announced to me and to the executive team that I was spending too much money on marketing. What?? Then I dug a little deeper and came to discover all of the paper we use to distribute our test reports—the company’s products—was being attached to our marketing budget.”

“So I was informed I was out of budget only to find out this large expense was misapplied. That’s where I really dug in. The company had just posted the position for VP Finance. I pitched myself. The company said ‘no’—wanted to continue shopping for just the right CFO—but finally, Jeff realized the value in advocating for me with the executive team.”

There he was – a 28 year old effectively fulfilling the CFO role, and the youngest voice at the executive table. He immediately dispensed with the $2 million accounting system the company had been implementing over the prior two years and replaced it with a $350,000 solution from Microsoft, Great Plains. In three months, the system was converted and could produce the information he had been so ardently looking for within sales.

“I was still the accounting manager—the company didn’t give me the CFO title for a year and a half until I had earned my stripes,” he recalls. “Yes, I was young, spry, and a little opinionated at times.”

But ultimately, Bolinder received the full title and role and has never looked back. “Not a lot of companies would have given me that opportunity,” he remarks.

Bolinder’s biggest piece of advice for others is to look at every turn at the ideas that can result in a tangible and measurable outcome for their company. By thinking entrepreneurially, he has built a tremendous career at a surprisingly early age without having to create and found a new firm on his own.

“People limit themselves when they think only about the status quo. Jeff Nelson calls me the ‘architect’ – I end up building and changing systems wherever I go.”

An inspiring story. And to John Bolinder and executives like him—we salute your efforts and we applaud your continued success.