Have you found yourself in a situation where you needed to get below the conversational surface with a team member but you end up floundering? How about a difficult conversation with your boss? Or a talk you’ve been dreading with a challenging team member?

I have found this to be more of an ongoing resource than simply another book. I review it often. I use it often. It has helped me in many difficult conversations. It frames a positive environment for me and the other person to have a fruitful discussion. This resource helps move us forward.

John Maxwell is a master at giving us the right words to say at the right time. If you often feel stuck in coaching sessions, this book will free you. It will help you add value to the other person and create a more professional, positive working environment.

In case you did not know, I am available to come to your company or organization to speak on a wide variety of topics.  For more information, please follow this link:  Jim Johnson, Speaker Information

I would love the opportunity to serve your organization in any way I can. 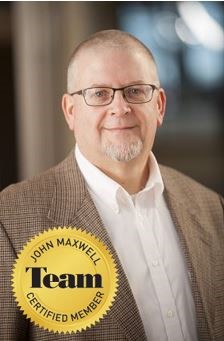 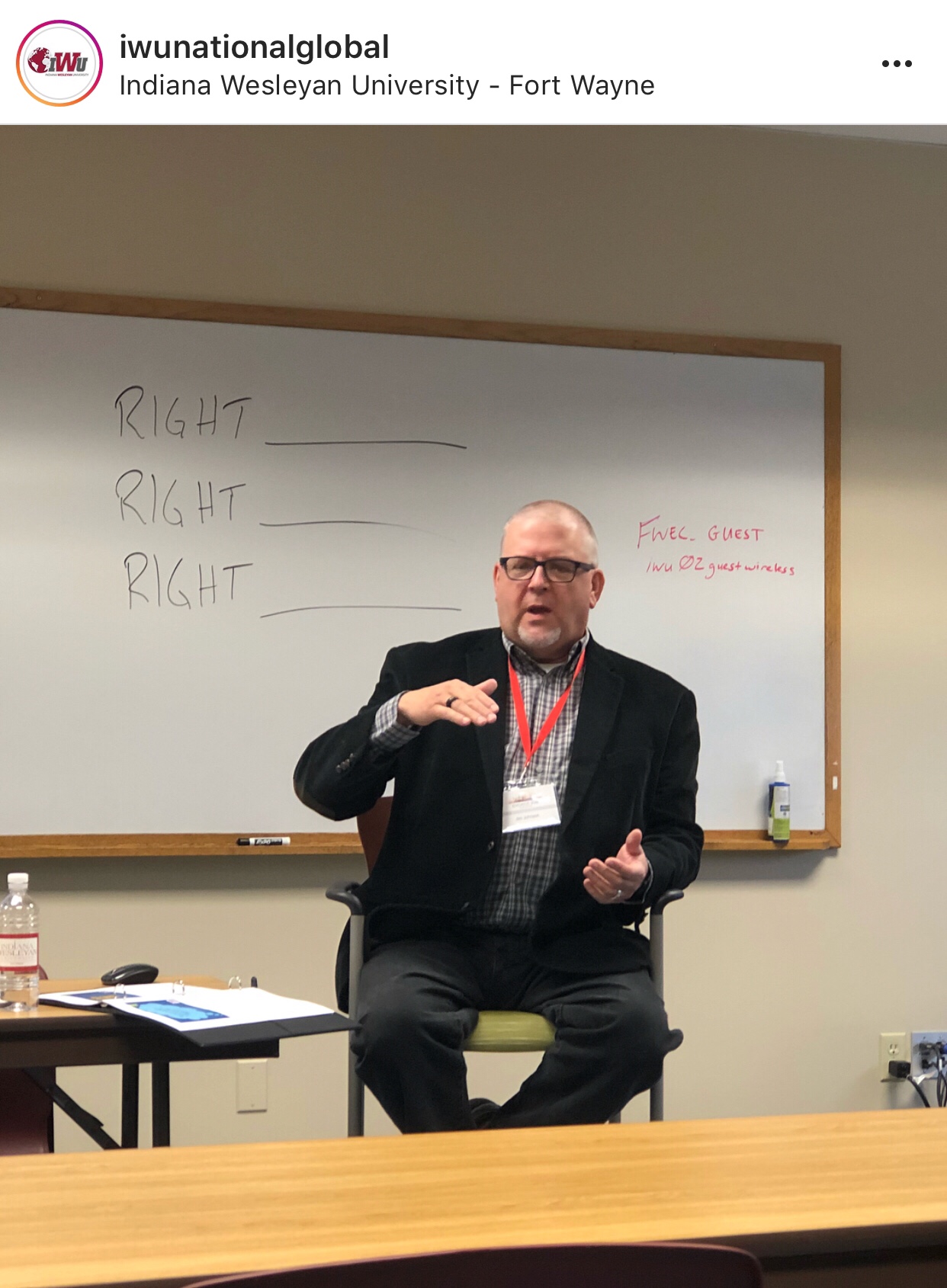 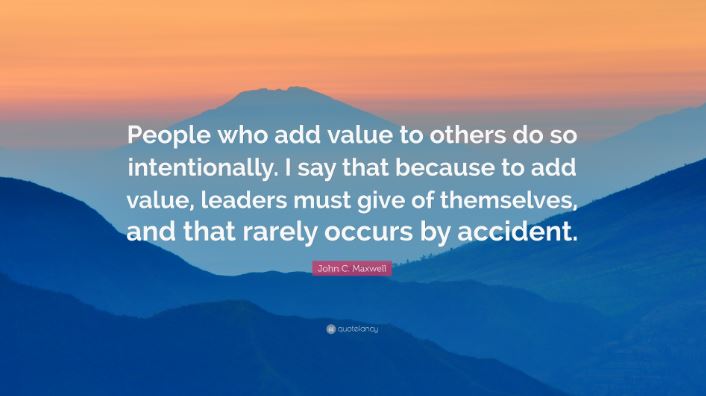 At the end of May, I had the opportunity to speak at the NACAAP Annual Conference in Denver.  In one of my sessions, I spoke on how leaders can add value to customers, coworkers, and their communities.  Part of what I shared was based upon John Maxwell’s writing.  Here’s a snippet of what I shared…

Remember, our work is not about quotas or reports.  Our work is about PEOPLE.

We tend to focus our work on data, reports, spreadsheets, etc.  When we do this, we miss the most important part of our day – the people around us.

So we need to intentionally value others.  How do we do that?

For me, one of the most effective ways to value others is to intentionally verbalize my appreciation of them and speak potential into them.

I have observed leaders are sometimes hesitant to verbally value their team members.  In fact, years ago I had a boss tell me, “I won’t tell you that you did a good job. Want to know why?  Because if I do that, you won’t try any more.”  This person knew nothing about me or people.  Regardless of your position, we all like to hear “job well done” from time to time.  It does motivate people.

I have been pushing myself to make the time to look a team member in the eyes and tell them “thank you” for their efforts.  I’m working harder at verbally giving them kudos.  I’ve also been intentionally speaking potential into others (i.e. sharing my vision of where I see them growing and ways I will help them get to their goals).

Last week, I gave a leadership book to an emerging leader and challenged them to read it.  I’ve offered that after each section, I would take him to lunch to discuss what he’s been learning.  Intentional.  Purposeful.  Direct.

I’ve had leaders in my life who have done this.  An independent grocery store chain owner did this for me almost 30 years ago.  “As I watch you work, I’m convinced there’s nothing you can’t do if you set you mind to it.”  Those words were (and still are) gold to me.

The founder of an international music organization taught me that anything is possible.  Don’t accept “no” as the final answer – there is always a way to make something happen. These words helped me maneuver through tough situations in Indonesia and in Communist-controlled Estonia (25+ years ago).  I apply this mindset in my life today.

I speak potential into my own son during baseball season.  I’ve seen my own words become reality to him.  I hope he holds on to these words.

There is no down-side in speaking value and potential into another human being.  But we miss out on changing someone’s life when we withhold empowering, encouraging words.

Leaders truly value others – and it is intentional.

My boss just shared the following with our Lead Team.  It is worth your time to read this.  I’m not sure where he found this, but read it, let it sink in, and then let’s all do it. 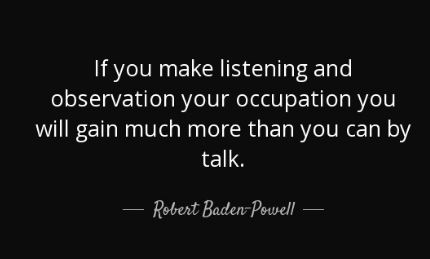 But Enough About Me…

I sat in on a solid coaching session with a regional manager and two area managers while traveling last week.

Okay, to be honest, I sat near the session and not “in it”.

The hotel I was staying in was under construction and the temporary dining area was not very large.

I was given the one open table near three guys having dinner and talking shop.

Not having earplugs or a television close enough to focus on, their conversation became the soundtrack of my meal. Thankfully, the most senior guy in the group doled out some pretty good advice.

Beyond the nuts and bolts of their particular business (some type of manufacturing), there was a more general piece of advice he gave that had me smiling and trying to see the reactions from his mid-30-years old dinner mates.

He told them, “Don’t take this the wrong way, but I heard way too many complaints about First World problems in front of your teams today.”

As his dinner mates smiled sheepishly, he continued, “You guys are doing well. I know you work hard and believe me, I’m proud of our results. But your teams don’t need to hear about how much your kids’ private schools cost or how frustrated you are with the guys putting in your new pool.”

I will give him credit.

He made that point in a clear, yet non-scolding way.

As they joked around a bit about not wanting to sound like “that guy”, the senior manager put a nice ribbon on the subject.

He told them, “Look, sometimes the difference between the boss that you are inspired by and one that you resent is what he or she talks about most. If you are always talking about yourself, they see you as a ‘me first’ person.”

He continued, “If you are asking questions about their jobs, their families, their goals… they’ll walk through a wall for you because they know you are interested in their success…not just yours.”

I fought off the urge to lean over and high-five that senior manager.

Well, mostly because that would have been really weird.

Whether it is the employees working for you, the peers working with you or the customers you work for, how much of your conversations are centered on them?

Folks who focus their attention on others tend to attract more goodwill and success towards themselves.

Strive to be that person. 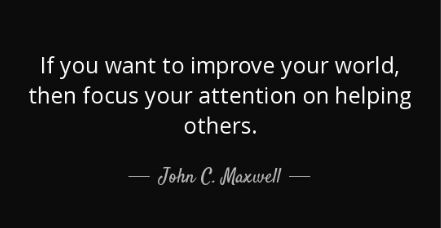 I am about to finish John C. Maxwell’s new book, No Limits.  If you have not read this book, order it now!  It will increase your capacity to lead and succeed!

Here’s an excerpt from the chapter on “Risk Capacity”.

“I knew I needed to develop a process to deal with fear, so I did.  It didn’t cure my fear, but it tamed it enough for me to keep taking risks.  It goes like this:

My discovery?  Each time I acted with courage and did what was right rather than giving in to what I felt, my will overcame my fears.  My fears have never completely left me, but they no longer control me.” 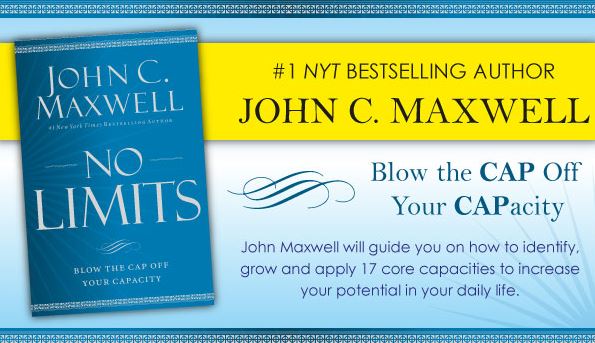 I recently read some interesting/sobering facts:

So if this is true, how are you becoming better at coaching your team?  They desire effective coaching from you.  They really want to be “very satisfied” with their jobs.  They do!

Someone once said the following:

More on this later…

To coach effectively, you also need to prepare to be an effective coach.

Where are you on this continuum?

Becoming an effective coach starts with YOU, the coach.  How can you develop yourself?

Becoming a better coach means you applying your EXPERIENCE in order to demonstrate EXPERTISE.  I know a lot of experienced coaches/managers.  I know far fewer leaders who demonstrate expertise in coaching people.  Note:  expertise does not equal perfection.  No one on earth is perfect, so rid yourself of that goal.  But any of us – all of us – can become better and become experts.

As a coach, you want to move your team from the ranks of the experienced to those who embody expertise.  Think about this:  what would your results be if your team was populated with experts vs those with merely with experience?  How would this impact your customers?  Your colleagues?  Your bottom line?

John Maxwell has said that “the growth and development of people is the highest calling of a leader.”

I encourage you to answer this calling.  Become better.  Influence your team to become better.  Improve your coaching sessions (or maybe start having them?).

In an upcoming post, I’ll be sharing some great questions you can begin using in coaching sessions that will enable your team to really think.  They will help you have more meaningful conversations.

I had the privilege of speaking with our branch managers last week on the topic of leadership influence.  I want to share here part of that presentation.

John Maxwell defines leadership as “influence – nothing more, nothing less.”  If this is true (it is, and I love this definition), then how do you build your influence?  Influence must be earned.  It will not be merely given to you.

Here are some of my thoughts on how you can build your influence with your team, coworkers, and your community:

What have you done to broaden your influence?  Share your thoughts with us all in the Comments section!

I recently picked up John C. Maxwell’s new book, No Limits. I’ve been reading it for the past couple of days. Here’s an excerpt from his chapter entitled “Emotional Capacity.” 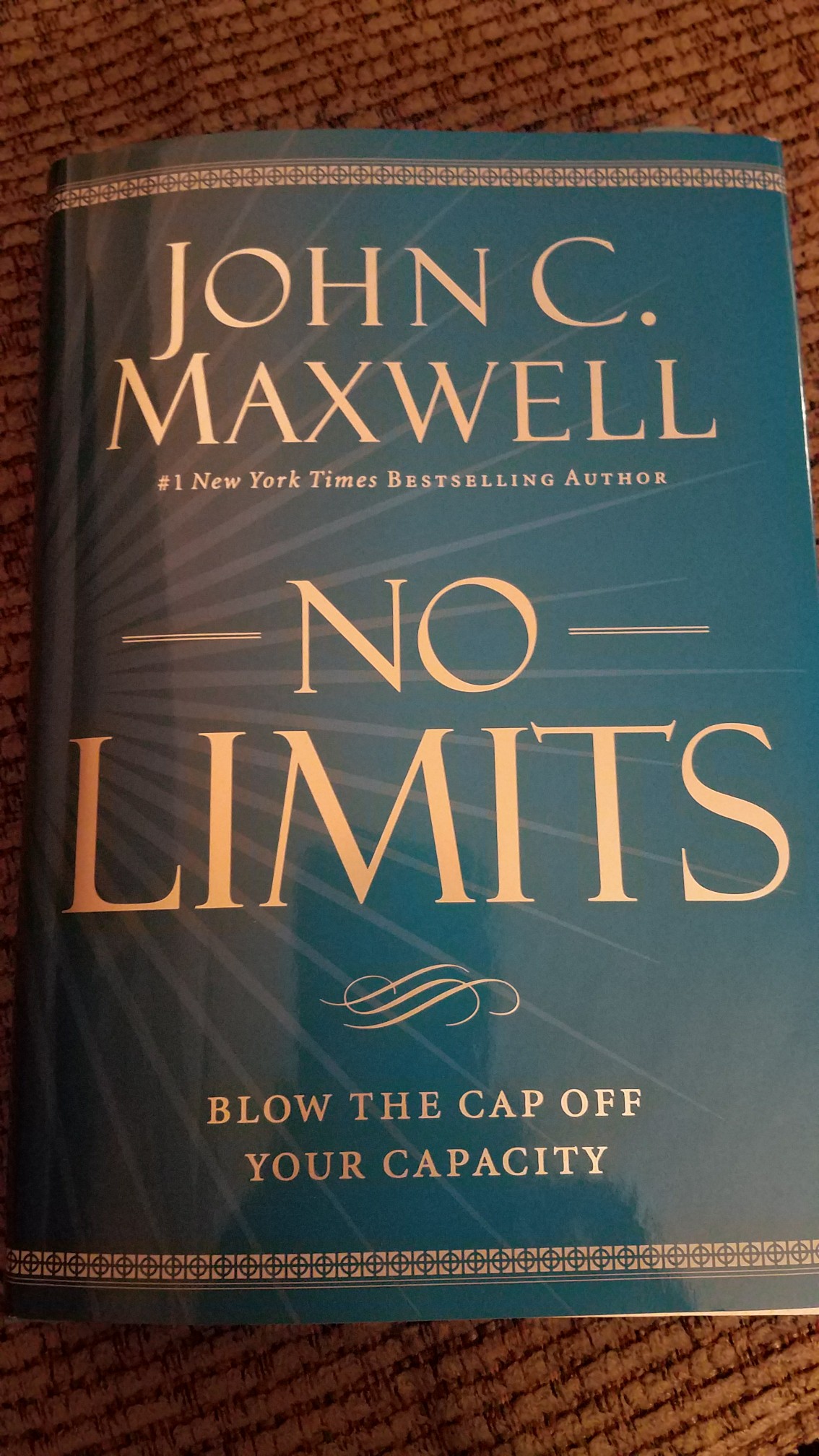 “Emotional capacity is the ability to handle adversity, failure, criticism, change, and pressure in a positive way…However, emotionally strong people are able to manage their emotions and process through difficulties. That allows them to increase their capacity and moves them closer to reaching their full potential.”

“Emotionally strong people do not expect immediate results. As they approach life, they know they are in it for the long haul. As they face struggles, they do so with energy and fortitude. They understand that genuine success takes time. They try new things and fail. They run into obstacles but persevere. They keep going, keep working. They focus on the right decisions they need to make, and make them quickly. They realize that they may change their direction overnight, but they won’t arrive at their destination overnight. They keep their eye on the big picture, and they don’t quit.”

“Controlling what you can and not wasting energy on what you can’t is one of the most important lessons we can learn in life.”

“One mark of resilience is learning to tell which pain deserves our attention paying attention to every pain, all the time, doesn’t lead to resilience. It usually leads to whining.”