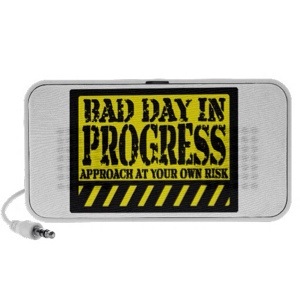 I had a bad day recently.

Chances are you have too.

Mine blindsided me, and it threw me off so much I got almost nothing accomplished that I wanted to accomplish.

I don’t like days like that. (Does anybody?)
But they’re inevitable in leadership.
* Someone sends you an email that sets you off.
* A crisis hijacks the day you were going to spend getting a project done.
* Unexpected bad news pours in.
* You experience conflict with a teammate.
* You simply woke up on the wrong side of the bed.

When I began in leadership, days like that often cost me more deeply than they had to:
– I would sometimes say things I regretted
– I occasionally took my frustrations out on people around me
– My family suffered if I came home and allowed my mood to ruin the atmosphere

In fact, when I look around me, I see too many leaders who let bad days undermine their leadership again and again. When they allow their mood to ricochet through the organization, a bad day can lead to several bad days for many others. It can fester conflict among team members. And it can jeopardize their home life.